Coop
Becky is life. She’s the sunshine that l 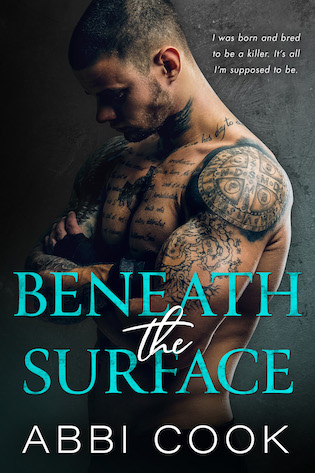 I was born and bred to be a killer. It’s all I’m supposed to be.

I take no prisoners. Until Lily. For her, I make an exception. But only for a week.

When I walk in, time starts ticking down to zero. Her father has seven days to save her.

Until then, she’s mine. Mine to have. Mine to take.

He leans in close to me and takes a deep breath in, letting it out slowly as an ominous hum reverberates in the space around us. “I don’t know what you’re doing, little girl, but trust me, you don’t want to tease a man stuck out alone in the country.”

Cason’s gaze travels down my body and back up again to meet mine. His lids heavy, he looks at me hungrily. “You’re playing with fire here, Lily. You’re going to get hurt.”

My knees shake at how intimidating he sounds, but I press them together and flash him my best fuck me smile. “I’m not a child, Cason. It’s not like I don’t know things.”

“And what do you think this is? Do you think if you get me to fuck you that I won’t want to kill you when the time comes? Is that what you’re thinking?” he asks in a low voice, his warm breath drifting over my ear with each word he practically hisses out before he steps back away from me.

My heart sinks at how callously he dismisses my plan, but I can’t let him see how frightened I am at this very moment. This can work. I know it can. I just have to see it through.

So I take a step closer to him, close enough that I can feel the heat coming from him through that black T-shirt that fits so perfectly over his toned body. I look up into his dark eyes and swallow hard. “What I was thinking was I didn’t want to be alone, Cason.”

The words hang in the sliver of space that separates us as I wait for him to respond. He just needs to say yes and I can do this.

He looks down at my T-shirt, and then his hand touches my hip, sending need dancing through me. “I’m not one of those boys you tease to get your own way, Lily. This is your one last chance to go back to your room and pretend this never happened because if I let you come in, the word no doesn’t exist in here.”

Every word drips with a threat of something he thinks I can’t handle, but I don’t care. Whatever he is inside that room, at least I’ll be alive there at the week’s end.

Abbi Cook grew up wondering if she was different because she always wanted to know more about the villain than the hero in the stories she read. When she got older, she found there were others in the world like her and devoured their writing, loving every dark word. She’s written her own tales for years, but in 2019 she decided it was time to take the next step and publish them. She’s never looked back since that day.

ights up my world. But for some reason, I just can’t seem to fully commit. Everything in my head is screwing with me, and if I don’t figure it out soon, I’ll lose her. And to make matters worse, my sweet angel of a daughter has turned into a rebellious seventeen year old that is doing everything in her power to kill me. Something’s gotta give or I’m going to lose everything I’ve fought for in my life.

Becky
Coop has always been a mystery, but he was my mystery. Now, though, I can’t take any more. I want him, but I want all of him. If he can’t let me in, I can’t stick around. I need the whole man, not just the pieces he’s willing to give me. But even if I get him, can I hold onto him? He’s the one thing I want most in this world, but I have a feeling that things aren’t going to go my way.

“You want to do what?” Storm asked.

“We’re going to scare the shit out of Kayla.”

“And why would we do that?” Tacoman asked.

“Because she’s breaking the fucking rules, and one of these times, it’s not going to turn out so well for her.”

Storm shoved his gun in his holster and then strapped on his knife. Tacocheese was putting on his vest. “I’m still not seeing what you hope to accomplish,” Storm grumbled.

“Hey, Thunders, when you have kids, you’ll understand.”

“Kids? Ha, never gonna happen. Troublemakers, all of them.”

“Exactly. The plan is, we’ll surround the house and then storm in, scaring the shit out of Kayla and whoever she’s with.”

“You want us to storm someone’s house?” Tacoman shook his head. “Not happening. You’re gonna get us all arrested.”

“We have Sean on speed dial. It’ll be fine.”

I glared at Tachocheese. “Are you a man or a pussy?”

“If this was your kid, sneaking out of the house at all hours, showing up at someone else’s house, someone you have no fucking clue about, wouldn’t you do anything you could to make sure that she thought twice about ever doing something so stupid again?”

“And that’s the difference between us. I’m not leaving my kid in a potentially dangerous situation that could get her killed. What if she’s with a rapist right now and doesn’t even know it? They hide in plain sight, hunting the weak.”

“But Kayla’s not weak,” Storm pointed out.

“Doesn’t matter. She’s inexperienced. Anyone can see that and they will use it against her.”

“I still think this is fucking ridiculous,” he grumbled as he strapped on the last of his gear.

“I read you loud and clear.”

“Send me the address. We’re heading out.”

We headed for the SUV and climbed in. I was driving because I was pissed and needed control over something right now. It was a short drive into town. I parked a block away from the address and hurried down the street, sticking to the shadows.

“Alright, Storm, you head for the back door. Tacocheese, you’ve got the garage door. I’ll take the front. I want all the information we can before we enter. If you see the target in trouble, we move in right away.”

“Just for the record, I don’t think Kayla would like being called a target,” Storm said. I slapped him upside the head, ignoring his scowl.

I made my way through the bushes to the front door, peeking inside the windows as I went. I was just about to get in position when I saw her move through the house, laughing at some asshole that was trying to grab at her. I saw red.

“Target acquired. Everyone in position.”

I tested the front door, checking to see if it was locked. It was. At least I knew she was trying to remain safe indoors.

I kicked at the door twice and then gave a final boot to the door and watched it swing wide open, banging against the wall. I saw the look of shock on Kayla’s face as I moved into the living room and cleared the area. The asshole moved in front of her, trying to protect her. Wrong fucking move.

“Down on your knees,” I shouted, pointing my gun at him. I knew that Tony Tacos and Storm were clearing the rest of the house, so I kept my gun trained on this asshole. He slowly moved to his knees, but my girl stood tall, refusing to get down. Obviously, she knew who I was. She would recognize the gear anywhere.

“No,” she said defiantly.

I walked forward slowly and placed my boot right over the fucker’s fingers, slowly lowering the weight of my body on top of his hand. He screamed in agony, but I remained staring at Kayla.

“Still want to stay standing?” I asked her.

“You’re being an asshole,” she shouted.

“An asshole,” I repeated, lifting my boot just enough to kick the fucker in the side. He tipped over, holding his side and gasping for air. Kayla stared at me incredulously.

“What are you doing? You’re gonna get thrown in jail!”

“Kayla,” the fucker whimpered. “Just do as he says.”

I waited for her to listen, but my defiant little girl just wouldn’t do it. I quickly snatched him off the floor and held him against my body, my arm wrapped around his throat. Tony Tacos and Storm entered the room, both with wide eyes.

“Should I call Cap?” Storm asked.

“He would do the same fucking thing if it was Caitlin,” Tony answered.

“Just…don’t kill him,” Storm said, narrowing his eyes at me.

I grinned maniacally. “I’ll take that into consideration.” I turned to the kid, whispering in his ear. “Have you ever felt the sting of a really sharp blade against your neck?” He shook his head wildly. “That’s a shame. It’s really a very…exciting feeling. Let me show you.”

I pulled out my knife and slid it ever so slowly against his neck, not actually putting him in any danger. I was quite good with a knife and there was no chance that I would accidentally nick him.

“Doesn’t it make you feel alive?”

He shook his head slightly.

“Dad, would you stop fucking with him?” Kayla said in exasperation.

“Dad? This is your dad?” the fucker shouted.

“Nice to meet you. You can call me Mr. Cooper.”

I’m a stay at home mom that loves to read. Some of my favorite titles are Pride and Prejudice, Harry Potter, Lord of the Rings, and Horatio Hornblower. I started writing when I was trying to come up with suggestions on ways I could help bring in some extra money. I came up with the idea that I could donate plasma because you could earn an extra $500/month. My husband responded with, “No. Find something else. Write a blog. Write a book.” I didn’t think I had anything to share on blog that a thousand other mothers hadn’t already thought of. I decided to take his challenge seriously and sat down to write my first book, Jack. I was surprised at how much I enjoyed writing. From there, the stories continued to flow and I haven’t been able to stop. I hope my readers enjoy my books as much as I enjoy writing them. Between reading, writing, and taking care of three small kids, my days are quite full.

My nieces and I got our tattoos done today ❤️❤️I love them and the bond we have. 😍🥰
Pretty nails by @poshnailspalexington They always do an excellent job on my nails!! Feeling fabulous
Finished cake 🎂 🧁🍰😋Fireball Cake!!! Yummy 🤤
Finished!!!! Bailey’s Salted Caramel Chocolate Cake 🎂 🧁🍰😋
Book Links:
🌻𝗖𝗢𝗩𝗘𝗥 𝗥𝗘𝗩𝗘𝗔𝗟🌻
The beginnings of Fireball boozy cake🎂🎂🎂
Part two! Decorated to come later.