Freya thought her fight was over.

After finally defeating Lord Uther, Freya fell into a holding pattern. With her husband and daughter gone, there was nothing for her to do except wait for change.

But when her girlfriend lights a rescue beacon, it becomes apparent that all is not as quiet as Freya thought.

DARKNESS is the fifteenth and final book in the Freya Snow urban fantasy series, which starts out as YA and follows Freya’s magical adventures through to university and into adulthood. If you like kick-ass, sarcastic heroines, immersive magical worlds beneath our own, and love that crosses the lines of magical feuds, then you’ll be instantly hooked on L.C. Mawson’s fast-paced urban fantasy series.

This is the FINAL book in the series! 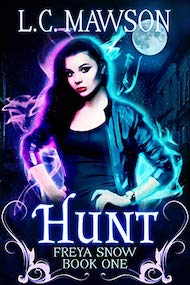 The wolf huffed as a plate of food appeared by her bedside.

She buried herself deeper into the blankets around her, willing herself to fall back to sleep, but her empty stomach wouldn’t let her.

Saying that she would rather starve than turn back was always a compelling thought in the moment, but she always, eventually, relented.

Fur retracted back into her skin as her bones warped, returning her form to that of a woman.

And her mind, as well.

She cringed as the now-familiar blanket of grief and guilt enveloped her.

The palace cook had filled her plate with curry, the one thing Freya had been able to keep down for months.

She had no idea why, but at least it was something.

Freya was still sure that she would prefer raw meat that the wolf could stomach, but she knew that she couldn’t ask for that.

She hadn’t even asked for this.

It had presumably been the result of the palace staff realising that she didn’t eat anything else they sent her.

Guilt gnawed further at her at that thought.

She would prefer it if they just ignored her, but she supposed that there was no way they ever would.

She was the one who paid their wages, after all. If she starved…

Well, Damon would still be there. And Katherine.

Maybe if Freya starved, they would finally be able to return home.

Her door opened, and Freya grabbed her blanket to pull it around herself before glaring at the intruder.

“I’m not dressed,” she growled at Rodrick, the wolf still in her throat.

He, infuriatingly, didn’t seem to react at all. “You’re never dressed. But I needed to see you while you were in humanoid form. I do not know if the wolf can understand me, but she never turns back when I request it, she just goes to sleep.”

The wolf did understand him, she just didn’t care.

“I didn’t ask you to arrange that.”

“No, but it has been too long. And as you were indisposed, I asked Prince Damon. He agreed that I should go ahead.”

Flames flared across Freya’s skin. “I thought I told you not to bother Prince Damon while he’s away from the Palace.”

“My Queen, you have been indisposed for weeks. While Lord Uther’s death, and the birth of Princess Katherine, means that things are now quiet, there are still some matters which cannot be ignored. If you will not deal with them, Prince Damon will have to.”

“What matters could possibly be so important? The nobles are just bitching like always.”

“And like always, they need their Queen to help them see sense. Otherwise squabbles will turn into something rather more dangerous. You did just avert a civil war, My Queen. It would be prudent not to let another fester while you’re distracted.”

“Fine,” Freya said as she steeled herself as she wrapped her blanket around her, forcing herself out of her bed and towards the bathroom.

She probably needed a shower. She couldn’t remember the last time she’d had one.

“Prince Damon will arrive here in an hour,” Rodrick said before leaving the room.

Some say she’s an ancient creature of nightmare that was unleashed from beneath the ocean, come to devour the souls of men. Others say that she’s a cosmic being from the beyond the stars that has taken corporeal form to learn our ways for some unknown end…

In truth, L.C. Mawson lives in a tower in the middle of a haunted forest, far from civilisation and is definitely (probably?) not a witch who curses those who trespass upon her land. And she definitely cannot turn into a dragon that flies over cities in the dead of night and whose cries are often mistaken for an approaching storm. Where did you hear that? That’s absurd…

The only contact she has with humanity is publishing a book once a month, which is definitely just for fun and not part of an ancient contract with a trickster god.