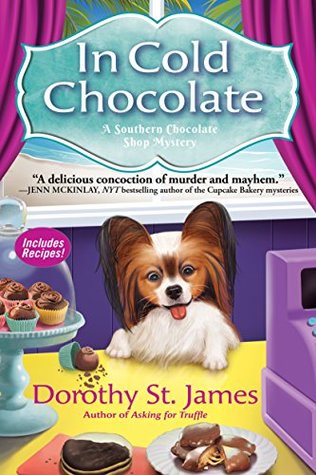 In Dorothy St. James’s third delectable Southern Chocolate Shop mystery, a new batch of chocolate and troubles of the heart cause a string of disasters for the Chocolate Box’s new owner, Charity Penn.

The vintage seaside town of Camellia Beach, South Carolina seems like the perfect place for romance with its quiet beach and its decadent chocolate shop that serves the world’s richest dark chocolates. The Chocolate Box’s owner, Charity Penn, falls even further under the island’s moonlit spell as she joins Althea Bays and the rest of the turtle watch team to witness a new generation of baby sea turtles hatch and make their way into the wide ocean.

Before the babies arrive, gunshots ring out in the night. Cassidy Jones, the local Casanova, is found dead in the sand with his lover Jody Dalton—the same woman who has vowed to destroy the Chocolate Box—holding the gun. It’s an obvious crime of passion, or so everyone believes. But when Jody’s young son pleads with Penn to bring his mother back to him, she can’t say no. She dives headfirst into a chocolate swirl of truth and lies, and must pick through an assortment of likely (and sometimes unsavory) suspects before it’s too late for Penn and for those she loves in Dorothy St. James’s third rich installment of the Southern Chocolate Shop mysteries, In Cold Chocolate.

Penn is at it again in this third installment of the Southern Chocolate Shop Mysteries.  The Maybanks are still contesting the will and Penn is determined to keep her shop.  But when a dark secret is revealed by her best friend, Penn is blindsided.  This secret could cause her to lose it all.

On top of all that Jody is framed for murder and Penn makes a promise to Gavin, to prove her innocence.   While sea turtles and chocolates keep disappearing, Penn is determined to figure out the mystery, even as the death threats roll in.  With her life in danger, Penn’s time might just run out and wouldn’t that be a shame with things heating up between Harley and her.  Can Penn solve the mystery in time?  Or will this mystery be her death?

I really enjoy this series.  I was really excited with this book, because Harley and Penn finally start to move forward in their relationship.  I love Harley.  He is the small time cute lawyer with a heart of gold.  It is about time Penn had someone on her side to love her.

In this book things really get heated with Penn and her mother.  A lot of secrets and truths are revealed and it is not pretty.  I cried reading this book.  It was sad and heart breaking at times.  This book is a steady pace cozy mystery, with fun-loving characters that will make you giggle.  I have fallen in love with these characters and look forward to more from Penn and the gang.  Especially since the ending has left me wondering who she is.  You will see what I am talking about when you read this one.  I can’t say more without ruining the book for you.

You could try and read this book as a standalone, but it would make more sense to read in order so you don’t feel like you are missing something.  I haven’t read book 1 Asking for Truffle, but I did read book 2 Playing With Bonbon Fire.   Sometimes I wish I would have read book 1 so I could get the whole story on how Penn came about to be the owner of the chocolate shop.

So if you are looking for a good cozy mystery with wonderful characters, then this book is for you.  So grab some truffles and bonbons and curl up with this book.  You are sure to enjoy.