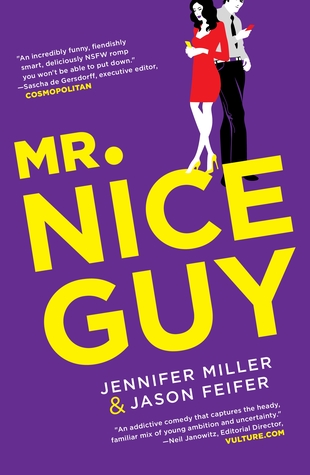 Lucas Callahan gave up his law degree, fiancée and small-town future for a shot at making it in the Big Apple. He snags an entry-level job at Empire magazine, believing it’s only a matter of time before he becomes a famous writer. And then late one night in a downtown bar he meets a gorgeous brunette who takes him home…

Carmen Kelly wanted to be a hard-hitting journalist, only to find herself cast in the role of Empire’s sex columnist thanks to the boys’ club mentality of Manhattan magazines. Her latest piece is about an unfortunate—and unsatisfying—encounter with an awkward and nerdy guy, who was nice enough to look at but horribly inexperienced in bed.

Lucas only discovers that he’s slept with the infamous Carmen Kelly—that is, his own magazine’s sex columnist!—when he reads her printed take-down. Humiliated and furious, he pens a rebuttal and signs it, “Nice Guy.” Empire publishes it, and the pair of columns go viral. Readers demand more. So the magazine makes an arrangement: Each week, Carmen and Lucas will sleep together… and write dueling accounts of their sexual exploits.

It’s the most provocative sexual relationship any couple has had, but the columnist-lovers are soon engaging in more than a war of words: They become seduced by the city’s rich and powerful, tempted by fame, and more attracted to each other than they’re willing to admit. In the end, they will have to choose between ambition, love, and the consequences of total honesty.

I wanted to love this book.  I really did, but I just could not get there.  Now did I like it?  Well yes and no.  I liked the story plot line, but disliked the deliverance.  The book was very, very slow.  I had a hard time finishing it.

The characters although interesting were somewhat maddening as well.  I wanted to fall in love with Lucas and Carmen, and at times I thought I might, but then when I finished the book I felt unsatisfied.  As for the supporting characters, well I did not care for many of them.  I especially did not like the part in the end where Lucas, his ex and her fiance’ met to talk.  I felt like that was a forced issue in the story, more like a selfish act on Lucas’s part.

At times in the story I felt there were tidbits that just did not belong or useless information.  Like the bag of ties.  What was the purpose of the ties being left behind but never returned?  The big finale was not what I imagined it would be.  I was expecting Lucas, being a journalist, to do a huge write-up in Noser to out  his boss, with pictures of proof and all.  Or I expected jail time for Nick and Jays.

With the expectation of this being a rom-com book, I would have expected a happy ending, declaration of love or so some sort.   The ending of this book just left me feeling meh.  I was neither excited, happy nor content.  I just think it fell flat leaving me unsatisfied.

Overall the book has a good base line story.  Some characters were interesting.  There were some key parts of the story that were meaningful, even though they were not delivered well.  It did have some life experiences that made the book feel somewhat relatable.   I liked it well enough, but it was not a favorite.  Overall I have to give this book a 3 star rating.

The Gravedigger’s Son, an all new 1,001 Dark Nights novella in the Charley Davidson series from New York Times bestselling author Darynda Jones, is available now!
🔥 #TeaserTuesday 🔥
Crazy for You by @leacollauthor is now LIVE!
Currently reading The Unveiled by M.C. Ray
Author @leacollauthor has revealed the cover for Falling for You, Annapolis Harbor Book 5!
Wow! 2 K followers what an achievement!! What better way to celebrate than a giveaway! Who wants to win this mystery by Preston & Child? Tell me what you are currently reading, Tag a friend, Like, Follow me, Share and save for a chance to win! Giveaway not affiliated with anyone other than Moohnshine’s Corner and its owners. US residents only. Giveaway ends Sunday 5/8 at 11pm est.
Wow! I can’t believe all the love and support I have received in the book world! Thank you from the bottom of my heart!❤️❤️❤️Giveaway coming soon!
💋This is not a drill! The Dancer will be here in just one week! Prepare yourself for the hotness of Calum and Kaia’s volcanic forbidden romance!💋