A Mother’s Sacrifice by Gemma Metcalfe

Blurb: God ensured she crossed my path. And that is why I chose her.

The day Louisa and James bring their newborn son home from the hospital marks a new beginning for all of them. To hold their child in their arms, makes all the stress and trauma of fertility treatment worth it. Little Cory is theirs and theirs alone. Or so they think…

After her mother’s suicide when she was a child, Louisa’s life took an even darker turn. But meeting James changed everything. She can trust him to protect her, and to never leave her. Even if deep down, she worries that she has never told him the full truth about her past, or the truth about their baby.

But someone knows all her secrets – and that person is watching and waiting, with a twisted game that will try to take everything Louisa holds dear.

Peeking out from under the duvet I am surrounded by darkness. I know I shouldn’t get out of bed because Mr Moon is still awake, watching over me until it´s time for the world to switch itself back on. Mummy once told me that a man lived on the moon called Aiken Drum. She said he had hair made out of spaghetti and played upon a ladle. I don’t know what a ladle is and I often wonder if his hair is spaghetti like the type I eat at school or spaghetti hoops, which are orange like my hair.

I look for Aiken Drum but I can’t see him. I even jump out of bed and tiptoe across the freezing-cold floor made out of scratchy wood and towards the window where Jack Frost blows me a kiss. But Aiken Drum isn’t there, just like always. I wonder if he´s really real or whether he´s just made up lik

Gemma Metcalfe is a Manchester born author who now lives in sunny Tenerife with her husband Danny and two crazy rescue dogs Dora and Diego. By day, Gemma can be found working as a Primary school teacher, but as the sun sets, she ditches the glitter and glue and becomes a writer of psychological thrillers. An established drama queen, she admits to having a rather warped imagination, and loves writing original plots with shocking twists. The plot for her debut novel ´Trust Me,´ is loosely based on her experiences as a call centre operative, where she was never quite sure who would answer the phone…

Prize: A Mother’s Sacrifice choccies & a lipgloss set
UK Only 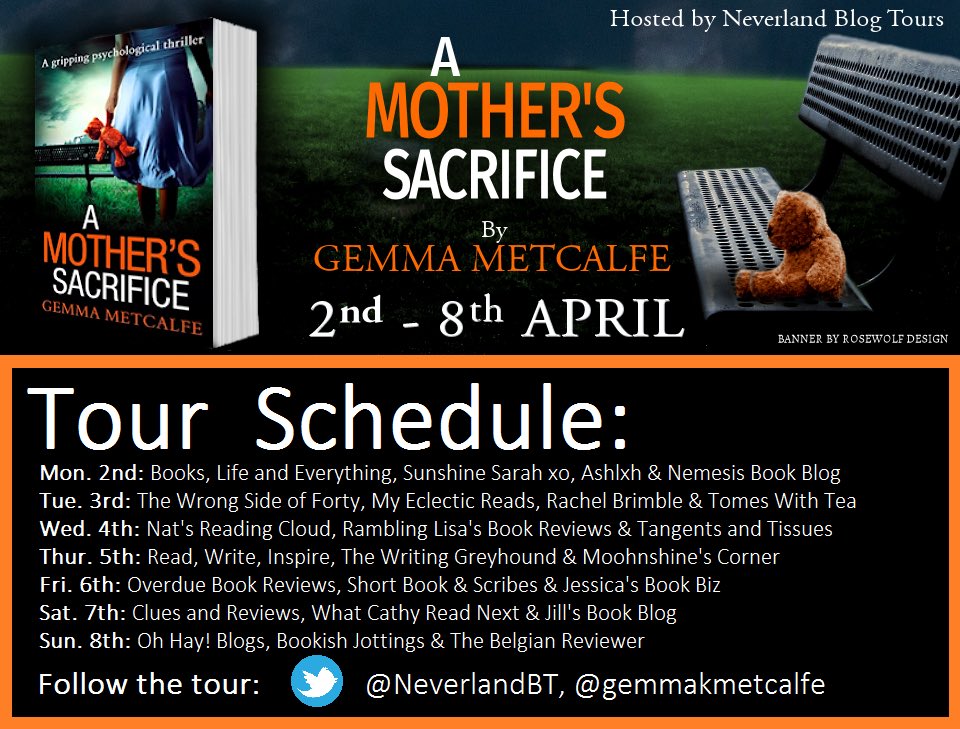 One thought on “Blog Tour| A Mother’s Sacrifice”