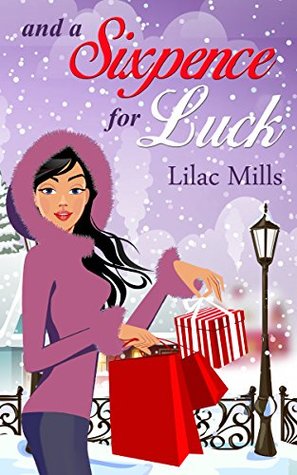 And a Sixpence for Luck

Daisy Jones has hit rock bottom. Or so she believes.

A cheating boyfriend, trouble at work, having to move back in with her mother, and being forced to compare her brother’s loved-up, newly-wed status and brand-new shiny house with her own dire lack of prospects, isn’t what she imagined her life was going to be like at thirty. To top it all off, Christmas is just around the corner!

Daisy, bless her, thinks things can’t possibly get any worse, but when her ancient great-grandmother persuades her to plant a silver sixpence in the Christmas pud for luck, Daisy is about to discover that they most definitely can.

Can a Sixpence bring you luck when your life is currently going down the tubes?

Well Daisy is just that.  Down on her luck.  Caught boyfriend cheating. CHECK  Move back home in her mother’s home. CHECK  Becoming a member of the woman man haters club.  Double CHECK  Can life get any worse?  Well grandma Gee Gee seems to think that giving her grand daughter a Sixpence will bring her luck and maybe just maybe life will get back on track for Daisy.  Well that is after you mix up ingredients to make Christmas pudding, everyone take a turn to stir the pudding with wishes, wish on the Sixpence before putting it in the pudding, cook the pudding for 8 hours and then finally eat the pudding finding the Sixpence.  Whoosh!!!  Luck is yours!  That is if you don’t choke on it first.

This book is hilariously funny.  A perfect read for the holiday season.  I really loved the concept that the book is centered around.  Sixpence for Luck! How exciting right!?!  I really enjoy reading books with a fun fact item that the a story is built around.

This was such a feel good read.  I smiled, laughed, frowned and cried.  A highly entertaining read full of witty fun and romance.  I had a hard time putting the book down.  I was hanging on, not wanting to miss what would happen to Daisy next.  If it weren’t for bad luck Dasiy dear would have no luck at all.  This book had some real doozy twists in it.  Some will have you in stitches.  Others will have you mad and some will make you cry.

The characters have such charisma and charm.  I especially found Freddie to be funny as hell anda little bit on the dramatic side.  I fell in love with Dr Hartley.  He is so dreamy and slightly silly with his overactive imagination.  As that imagination got him into a bit of trouble with Daisy now and then.  Poor Poor Daisy.  Man did she have it rough.

This is the second book by Lilac Mills that I have read.  I really enjoy her way of writing romance.  She makes the stories so entertaining with charming and funny characters.  Her books are very enjoyable.  The characters are developed and the stories flow so smoothly.  She takes a book with a serious side to it and adds in a romantic charm with a funny twist.  I will definitely be on the look out for more from this author.

For a little fun

The History of the Silver Sixpence

What is a sixpence?

A sixpence was a coin used in the British Empire beginning in 1551. One sixpence represented six pennies. The last year of use of the sixpence coin was 1967.

How did the sixpence tradition begin?

In the middle ages, the people were very superstitious. They believed that much of their life was controlled by evil spirits. Anything they could do to ward off those spirits was wise. They felt that those evil spirits were particularly active during rites of passage, such as weddings, so it was important to use good luck charms to keep the bride and groom safe on their wedding day. Any type of talisman from a horseshoe to a lucky coin was considered a good omen.

During the early 1600’s it was customary for the Lord of the Manor to give his bride a piece of silver as a wedding gift. This was symbolically represented by a sixpence coin. It later became a tradition to include a sixpence in the dowry that was given by the bride’s family to the groom. That tradition of the sixpence as a symbol of good luck continues today.

Some families have passed down the same sixpence through the generations to continue the hope for good luck to future brides. It’s also nice to seek out a sixpence minted in the year of your parents or grandparents wedding, birth years, or some other important family occasion.

Why is there a “thistle” on the back of many sixpence coins?

The thistle is the national flower of Scotland. According to legend in the 1200’s the Danes from northern Europe attempted to invade Scotland. Hiding under the cover of darkness their raid upon sleeping defenders was stopped when a barefoot raider stepped on a thistle and howled out in pain, alerting the defenders who drove the Danes away. The thistle started appearing on Scottish coins in 1470. The back of the last sixpence features a garland of roses, thistle, shamrock (three leaf clover), and leek. The words “Fid Def” are also on the back of the sixpence. This is Latin for fidei desfensor, or defender of the faith.

*Information on the histoy of the sixpence copied and pulled from https://www.silversixpence.com/sixpencehistory

I’ve been a beta reader for a long time now, and it’s something I get great satisfaction out of.

If you don’t already know, a beta reader is someone who will read an author’s work before it is published (before ARCs are distributed in fact) to gauge a typical reader’s response to a novel. This stage generally fits in after the editor has had her say and before publication.

For the author, it’s a good idea. If the majority of responses come back negative, then he should revisit his manuscript, as this is a good indicator that readers in general may not like his work.

But being a beta reader should involve more than simply saying “I liked it”. Although the author will be delighted to hear such a thing, it won’t provide him with the necessary tools to help him grow as a writer. Similarly, saying “I hated it”, won’t do him any favours either. It might just make him cry for a week!

What the author needs to hear are the reasons for liking or disliking it. Yes, I know not every book will appeal to every reader (I wish), but say an author sends out 10 copies, and 7 of his betas tell him the same thing, then he has cause to have a serious rethink about whatever that thing is. I know that entails rewrites (gotta love those little darlings), and sending the manuscript back to the editor again, but it can’t be helped. And authors will thank you for your honesty. Just don’t be too harsh – please…

The reason why I say the book needs to be in more or less publication condition, is that as a reader you shouldn’t be distracted by typos, bad grammar, spelling mistakes, etc. You should read a clean copy, so your feedback reflects what a typical reader might say.

Personally, I’m quite happy to accept an unpolished manuscript, and I’ll feedback with notes on plot holes  (if there are any), what I think of the characters, the story arc, whether I feel it is rushed in places, or if I think chunks can be omitted (backstory is one of my pet hates!), or anything else which I feel doesn’t work.

I also feedback on what does work, though I do find that the less I have to say, the more I enjoyed the book and the less I can find to nit-pick about. The length of time it takes me to read a novel is also a good indicator, for if I am engrossed in a story, the devil himself has to wrestle it away from me! So I’ll pass that detail on to the author too.

Beta reading takes time. It’s not your simple read and review. I often pause to make notes, and if something doesn’t work in the book, I sometimes have to have a good search as to why.

But it is rewarding, and even though the author may not act on any of my comments (and I never really know if he has because I rarely read the published article), I feel that I have helped them develop their craft – even if it is only to tell them how wonderful they are and to please keep on writing!

Lilac spends all her time writing, or reading, or thinking about writing or reading, often to the detriment of her day job, her family, and the housework. She apologises to her employer and her loved ones, but the house will simply have to deal with it!

She calls Worcester home, though she would prefer to call somewhere hot and sunny home, somewhere with a beach and cocktails and endless opportunities for snoozing in the sun…

When she isn’t hunched over a computer or dreaming about foreign shores, she enjoys creating strange, inedible dishes in the kitchen, accusing her daughter of stealing (she meant to say “borrowing”) her clothes, and fighting with her husband over whose turn it is to empty the dishwasher.

And A Sixpence For Luck Giveaway!

Prize: Signed copy of the book and a silver sixpence necklace