Woohoo!!!  It is Friday and I have a treat for you!  Today I am revealing an awesome new book cover from Katrenia Martinez for her new book Witch’s Wrath, book 3 in her Blood and Magick series, releasing today!

Publishing: June 30, 2017 – No Pre-Order
Urban Fantasy with a touch of Paranormal Romance

A new witch in town, a brutal bloodbath, and I’m out of options.

Evil gathers in the Louisiana swamps, and it comes for the witches of New Orleans. If I had known, maybe I would have kept my guard up; I would have spent more time securing the city instead of spending my time learning about magick, and trying to bring witches and vampires together. But vanquishing the demon-bloods left us complacent, and comfortable. We celebrated, and enjoyed the period of peace that followed.

Now we have no idea of the danger we’re all in.

When unidentified vampires come in the night, swift and deadly, the witches of the city are left scattered, hurt, and broken. Though I’m wracked with grief for the injured and the dead, I have to find a way to lead, but there are those who won’t make that easy for me; those who would rather go back to the old days, where witches killed vampires with impunity, whether they were decent people or not. I can’t allow that to happen. We worked too hard to make New Orleans an inclusive place, and I’ll die before I let someone destroy everything we’ve built.

Inspired by fantastic authors such as Karen Marie Moning, Richelle Mead, and Shannon Mayer, Magick Reborn is the first book in Katerina’s brand-new Blood and Magick series of urban fantasy novels. Like deep mysteries, plenty of steam in your romance, and watching your heroine become a badass? This is the book for you!

THE BLOOD AND MAGICK SERIES 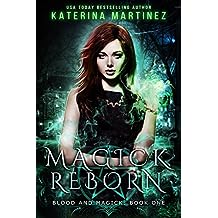 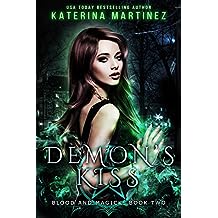 Book 1 is discounted for a limited time to $0.99.  Both available in paperback and audio as well.

Katerina Martinez is an up and coming author who writes supernatural fiction with a creepy, thrilling, and romantic bent. Though she has been writing for a couple of years, her success recently exploded with the release of “Dark Siren”, the first book in the breakout “Half-Lich” Trilogy which became an instant bestseller in 2016.

She follows the “Half-Lich” series with the “Blood and Magick” series—a story about a young writer who, in the aftermath of a brutal breakup, moves to a magickal new city in the hopes of rediscovering herself. In “Magick Reborn”, we pick up after Madison makes her move to New Orleans and watch her as she settles in, meets the local witches, and discovers a terrible, deadly secret hiding right under her nose.

If you would like to keep in touch with Katerina, learn about her work, and get notified when the sequel to Magick Reborn launches sometime in February 2017, just follow this link, sign up, and don’t be shy to drop her an email: